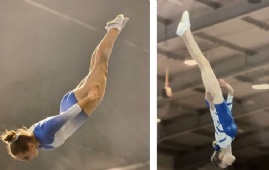 The 2022 English Championships finals were held in the Sheffield Arena over the weekend of 15 and 16 of October. The gymnasts had a chance to qualify at two previous competitions in order to secure a place. However, this was a particular challenge for the two Year 11 students; Ella and Holly, as due to their silver DofE were only able to attend one qualifying competition throughout the year, so both did very well to secure their place with one attempt.

Ella took part in the Silver 15-16 competition and after a good first routine, she completed her second routine which was her first time competing it and showed great determination in order to keep the rhythm of the routine but unfortunately faced a landing deduction which resulted in her just missing out of the final and finishing in 11th position. This was Ella's first English Championships and she achieved many goals and made her coaches and teammates proud.

We are very proud of your achievements!